Who wants to turn on the oven when the temperature is threatening triple digits and the humidity makes it feel like a sauna outside even after the sun goes down? I do, if it means making these onion rings. Because they are totally worth it.

I like saving the best things on my plate for last, and the onion rings always get eaten after the sandwich. So forget meal-planning around the entrée—I have made these onion rings probably oh 5 or 6 times in the last month, and I’ve been doing the grocery shopping according to What Goes With Onion Rings Besides Regular Burgers. Shrimp rolls? Check. Turkey burgers? Check. Patty melts? Check.

The main reason the onion rings are baked and not fried is (confession) I’ve never deep-fried anything in my life and the thought of it kind of terrifies me. Dropping food into a vat of scalding hot oil just sounds like an awesome way for me to get annoyed at trying to maintain the proper temperature, set off the smoke detector / scare the crap out of the dog, and inevitably burn myself with spattering. Coordination isn’t my strong suit, and although I’m pretty adept at quickly jumping out the way when I accidentally drop the chef’s knife that I was holding two seconds ago (it was just in my hand! how did it fall out?!) (this seriously happens about once a week), deep-frying presents a new and uncharted territory of ways to injure myself. 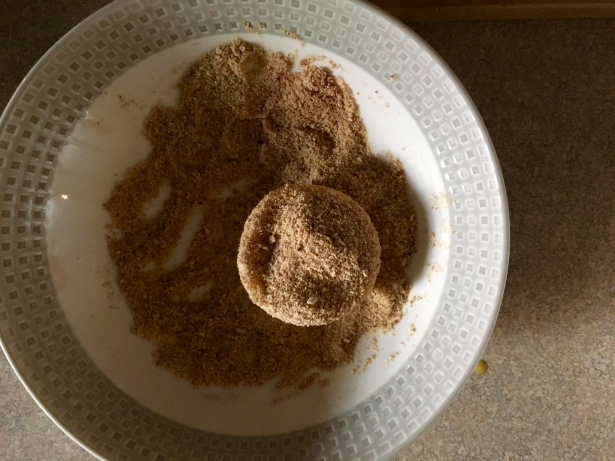 Coating the inside first and then pressing more to the outside helps avoid gloopiness.

Also, I generally try to keep home-cooked meals on the healthier side. I mean, let’s not totally fool ourselves—these onion rings are still cooked in a slick of oil that I wouldn’t call “scant,” and we’ve basically taken a plain vegetable and beefed it up with a nice layer of refined carbs. But rich food is more enjoyable to me when I don’t know the details about what all is in it. I’ll gladly take French fries, hollandaise sauce, and milkshakes when I’m eating out, but I’d rather not make them at home because then I can’t be as blissfully ignorant about exactly how much oil / butter / ice cream went into them.

Ready for the oven.

So, I tried making these baked onion rings after deciding that getting an occasional fix with the fried kind from the dive bar up the street just wasn’t cutting it. I wanted a non-fried version I could make at home. I was lucky and they turned out pretty great on the first attempt. Now all I have to do is figure out what sandwich to accompany them next… Tuna melt anyone?

Note: Use peanut oil like it says. It has a high smoke point and won’t burn easily. Also use a yellow onion like it says. I tried sweet onion and it turned out too mushy, and the yellow onion completely mellows out with cooking. I’ve never tried making more than 2 servings of these at once since I am usually just cooking for myself and my husband, but I imagine that you could double it pretty easily and use 2 baking sheets, rotated halfway through.

I consider myself lucky to have a husband who likes cooking and is good at it. We take turns cooking dinner on a weekly basis, and sometimes we argue about whose week it is because we both have recipes picked out that we want to try. But I can’t really get annoyed because my husband is insisting that it’s his turn to cook. Or complain if we eat late because he’s perfecting his pepperoni pan pizza with a home-made crust. Or get grumbly because I have to fit into a dress for a friend’s wedding in a couple of weeks and he made some amazing short ribs and mashed potatoes that I’m having a hard time resisting seconds of. Unfortunately, not whining has never been my strong suit, but honestly, our sharing of dinner duty is a pretty great situation.

The only real problem happens if one of us doesn’t check the fridge very well before we go grocery shopping, because sometimes we buy produce that we already have. This is how we ended up with two large bunches of broccoli this past week. Fortunately, I have a new favorite way to prepare broccoli. 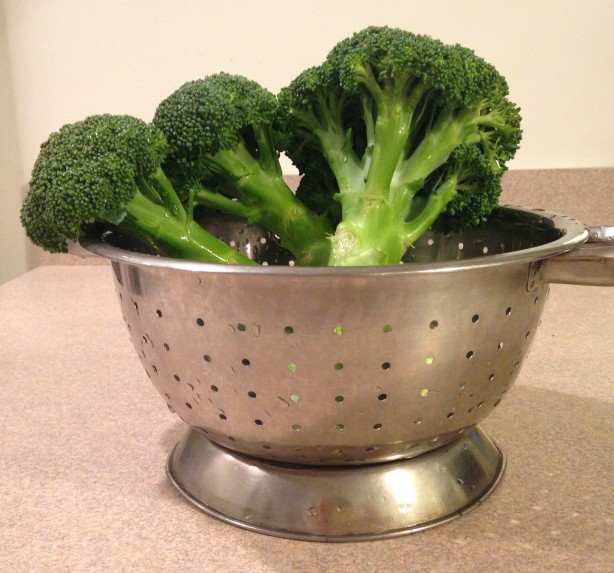 I first tried making broccoli like this after having a something similar in a restaurant while traveling over the summer. It was tender but still had some tooth, and it was a little charred—in the good way— in some spots. I think only the florets were served in the restaurant, but in my version, I use the whole broccoli: both the crowns and the stems. 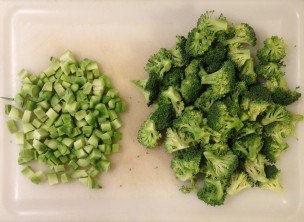 I haven’t fully embraced the “crisp-tender” phenomenon for vegetable cooking, because sometimes they still taste raw to me. If I want that sort of flavor, I’ll probably just eat the raw vegetable. And I’ll admit I’m not averse to Southern-style, cooked-til-they’re-army-green vegetables. For this recipe, I wouldn’t call anything crisp, but nothing is mushy. The stems are first cooked separately from (and for significantly longer than) the florets, so that they take on a texture like most any other roasted winter vegetable. The florets are steamed/boiled for a very short time, and then seasoned. I use powdered onion and garlic, which I tend to avoid, but they work well here, plus they’re simple. Smoked paprika is also added, and let’s be honest, smoked paprika makes everything better. It is like the bacon of spices. Finally, everything gets put under the broiler for a few minutes, until the florets get just a little bit blackened. 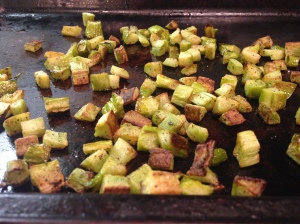 Note: My bunch of broccoli yielded about 1 1/2 cups of stems and 5 cups of florets. You might want to add more or less seasoning and/or olive oil depending on how big your bunch is. Also, I cook the florets in a small amount of water in a covered pan because it’s quick, easy, and there are fewer dishes to wash, but you could also steam them in a steamer basket.