I did not make this (sort of) frittata from (mostly) egg whites because I wanted it to be healthier and threw away all the yolks. (That will happen after I enjoy holiday food.) No, it has mostly egg whites because I had a ton of them leftover after making lemon curd, pastry cream, and tart crusts. Why the glut of decadent desserts? Well, I’m not above bribing my students, so every year between Thanksgiving and Christmas, I give them raffle tickets when they participate, and then we have a drawing for prizes on the last day of class before winter break. This year, tartlets, eclairs, madeleines, and—the most prized possession of all—homework passes were in the mix.

After the frenzy of baking, I made a mental note to collect money from my classes next year and buy treats from a local bakery in order to maintain my sanity. And then I tried to figure out what to make with the 7 egg whites and 1 whole egg (it didn’t want to separate nicely) that I had. Anything sweet was out of the question because I was on a sugar overload after all those bowls and beaters that I had licked, so a frittata seemed like the best way to go. And, as the title says, it’s not really a “frittata” because it’s cooked entirely in the oven and not at all on the stovetop. I supposed you could call it a “crustless quiche,” but “crustless quiche” makes me feel the same way a lot of people do when they hear the word “moist,” so I’d prefer to misname it a frittata. Also, it’s cooked in a cast iron pan, which is not nearly dainty enough for anything that calls itself a quiche.

I make frittatas pretty frequently; I usually use whole eggs and keep it vegetarian. I was afraid that the egg whites would make it bland, though, so I fancied it up a little more than I usually would. First, I found some Trader Joe’s chicken breakfast sausage links in the freezer, so I browned up a couple of them to add. Next, I harvested all the kale in the garden that’s threatening to die every time a frost comes around. It’s Red Russian kale, which supposed to be very cold tolerant, but it looked like it might be on its last leg. 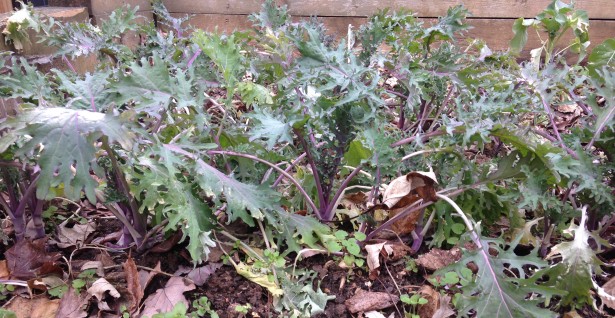 I like my frittatas with a lot—and I do mean a lot—of vegetables. Even though my pile of kale was overflowing the salad spinner, it barely weighed 8 ounces, so I decided to use all of it.

Next, I usually just toss in some raw onion, but I caramelized half of a yellow onion instead. Finally, for the cheese, we had provolone but, oddly enough, it was a really nice provolone that was quite strong, and I found it to be almost overwhelming. So, I used just a bit of it and added some mozzarella for gooeyness and to let the other flavors come through.

Note: I was double-checking the size of the skillet I used, and it says 5 on it, but it was about 7″ in diameter. And so I learned that the numbers on cast iron skillets correspond to certain standard pan sizes, not the actual diameter in inches of the pan.

You could make this in the same size pan with 4 whole eggs instead of egg whites. Also, my 8 oz. of kale didn’t need to be de-stemmed. If you have to de-stem your greens, you might want to start out with more than 8 oz., or just weigh them after you stem them instead of before. For the sausage,  I used 2 links of  breakfast sausage, and they weighed about 2 1/2 oz. before I cooked them. Lastly, this frittata reheats nicely in the microwave and will keep well for a day, but after much longer than that, the cheese will start to take on an unpleasant texture.